People and Passion are key to a good meal.

A visual artist by trade.  She spends much of her time on the road with musicians, travelling the world organising education workshops and outreach programmes for the festival.

Annie cooking with musicians at WOMAD.

‘Over time, it became clear to me that musicians and artists have incredibly interesting back stories that inform who they are and what they play,’ said Annie. Jimmy Hendrix famously ate garlic spaghetti for breakfast because he lived his life the way he wanted it to be.  Annies shopping list for WOMAD is the kind that includes bison meat, yak butter and reindeer blood.

Annie recalls a conversation with the Chinese musician Guo Yue, about the importance of food, how it kept you connected to your home when you were travelling and also about the connection between food and music.

Guo was raised during the cultural revolution, and he said that running through the alleyways of Peking, as it was then , he knew by the rhythm of the chopping that was being chopped -whether it was vegetables meat or fish.  and those rhythms really connected strongly with him in terms of music.  He later opened a restaurant in London – The Bamboo Flute in Fitzrovia. and has written a wonderful book, Music Food and Love, which is about bringing all the three things together.

The first Taste the world stage at WOMAD was held in 2006 where musicians would come on stage and cook and talk about their lives.  Much to Annie’s delight both the artists and audience loved it.  Annie will be hosting the Womad’s annual UK festival at the end of this month.

Smell can bring up potent memories for people.  Afircan artist N’Faly Kouyate said to Annie ‘Oh I remembered making this with my mum. I remember the song she used to sing when she was cooking.’  The he shut his eyes and sang.  There wasn’t a dry eye at WOMAD because his mother had recently died.

The places cooking evokes aren’t always so far flung?  For example ESKA, a Zimbabwe-born folk singer who grew up in South London said ‘I can’t cook anything from Zimbabwe.  I’m a Peckham girl!’ In the end she created something called flying fish and chips with a tropical dessert. 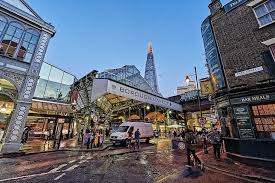 A potent memory for me is visiting The Borough market and Covent Garden Flower market with my dad as a small child as my dad was a greengrocer his whole career and probably one of the inspirations for my interest in food and drink and cooking.  It was such an adventure getting up at 5.30am in the dark, driving into central London in the dark in a beaten up ford van, seeing all the produce unloaded from the docks and choosing boxes of bananas from Africa and potatoes from Cyprus and etc…

Annies big thing this year is she has Norwegian musicians coming who want to make reindeer blood pancakes.

Sharing food is part of the ethos of WOMAD

The idea of people from all nations and backgrounds coming together to break bread chimes perfectly with WOMAD’s founding ethos to be ‘inspiring and outward looking, and strive towards a world with no boundaries.’

I agree wholeheartedly with Annie that there is no better way than to sit around a table and share food and talk about things and resolve problems.  This is exactly what I do in my day job as an occupational therapist working in mental health.

I’ve always used cooking therapeutically with service users and they love it.  Even when I worked in prison mental health I used cooking to engage hard to reach prisoners.  I remember making kofta kebabs with a Cypriot prisoner and Chickpea and rice with a Caribbean prisoner.

There is nothing more universal than food, music and conversation.

Please get in touch with SurreyK.  Id love to hear your food and music stories.