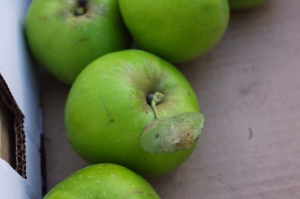 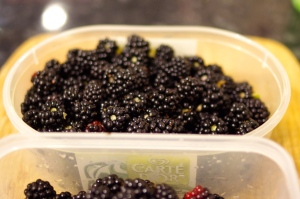 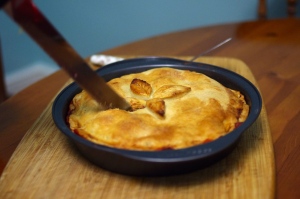 “Autumn is a second spring when every leaf is in flower.”  Albert Camus.

September is officially the middle of the British apple season. English apples divide into four types: earlier ripen in August through to early September, midseason from September to October: late season, for eating October to December, and extra late, for eating December to May. So, but for a few months, native apples are available for eating and cooking.

Malus domestica ‘Bramley’s Seedling’ (commonly known as the Bramley apple) is the most delicious cooking apple.  The tree in our garden is an espalier, one grown flat against the fence, with pairs of branches from the central stem.

As I like to keep things seasonal at SurreyKitchen and the park near to our house was spilling over with glistening blackberries, I decided it was time to make my husbands pie.

English apple pie recipes go back to the time of Chaucer.  The 1381 recipe lists the   ingredients as good apples, good spices, figs, raisins and pears.  The cofyn of the recipe is a casing of pastry.  In English-speaking countries, apple pie is a dessert of enduring popularity, eaten hot or cold, on its own, with ice cream, custard or double cream.  Most modern recipes require an ounce or two of sugar, but the medieval recipe does not.  This is most likely because sugarcane imported from Egypt was not widely available in 14th century England and was also incredibly expensive (between one and two shillings per pound).  Honey which was a lot cheaper in medieval times is also exempt, which tells us that medieval people did not have quite as sweet a tooth as their descendants.   It is likely that pear juice was used to sweeten the pie instead.

Apples are high in fibre, low in calories and a great source of vitamin C.  Eating an apple before exercise can also boost exercise endurance.  Apples also lower the risk of cardiovascular disease, Alzheimer’s disease, cancer and diabetes.

This traditional pudding will go down a treat after a roast on Sunday this Autumn, and ladies it will sure as hell keep your husband, boyfriend, partner etc… smiling as Winter draws closer!

You will also need a shallow 26com pie dish

1) Sift the flour and salt into a large mixing bowl.  Cut the fat into small cubes and add to the flour.

2) Using your finger tips, gently rub the fat into the flour.

3) When the mixture looks crumbly, start to sprinkle 2 tbsp water all over.  Use a round-bladed knife to start mixing, cutting and bringing the mixture together with your hands to form a smooth ball of dough that will leave the bowl clean.

4) Rest the pastry, wrapped in foil or polythene, in the refrigerator for 20-30.

5) Peel core and slice the apples straight into the pie dish.

6) Sprinkle in the blackberries and the sugar.

7) Roll out the pastry to about 1 inch (2.5cm) larger than the pie dish, then cut out a 1 inch (2.5cm) strip to fit the edge of the dish.  Dampen the edge with water, then fit on the strip of pastry, pressing it firmly and dampen that too.

8) Press the rest of the pastry over that to form a lid.  Use a sharp knife to trim any excess pastry off.  Use the blunt side of your knife and your thumb to make an impression and the broad blade of the knife to draw in the edges of the pastry.

9) Make a steam hole in the centre and if you have time roll out some decorative Autumn leaves from any left over pastry trimmings.

10) Brush the pastry with milk and sprinkle on a light dusting of caster sugar.  Place the pie on a baking sheet on a high shelf and bake for 10 minutes, then reduce the heat to gas mark 5, 375F (190C), and continue baking for a further 30 minutes.

11)  Use a skewer to take out a piece of apple from the centre to test if it is cooked.  If it is still firm, give it another 5 minutes.